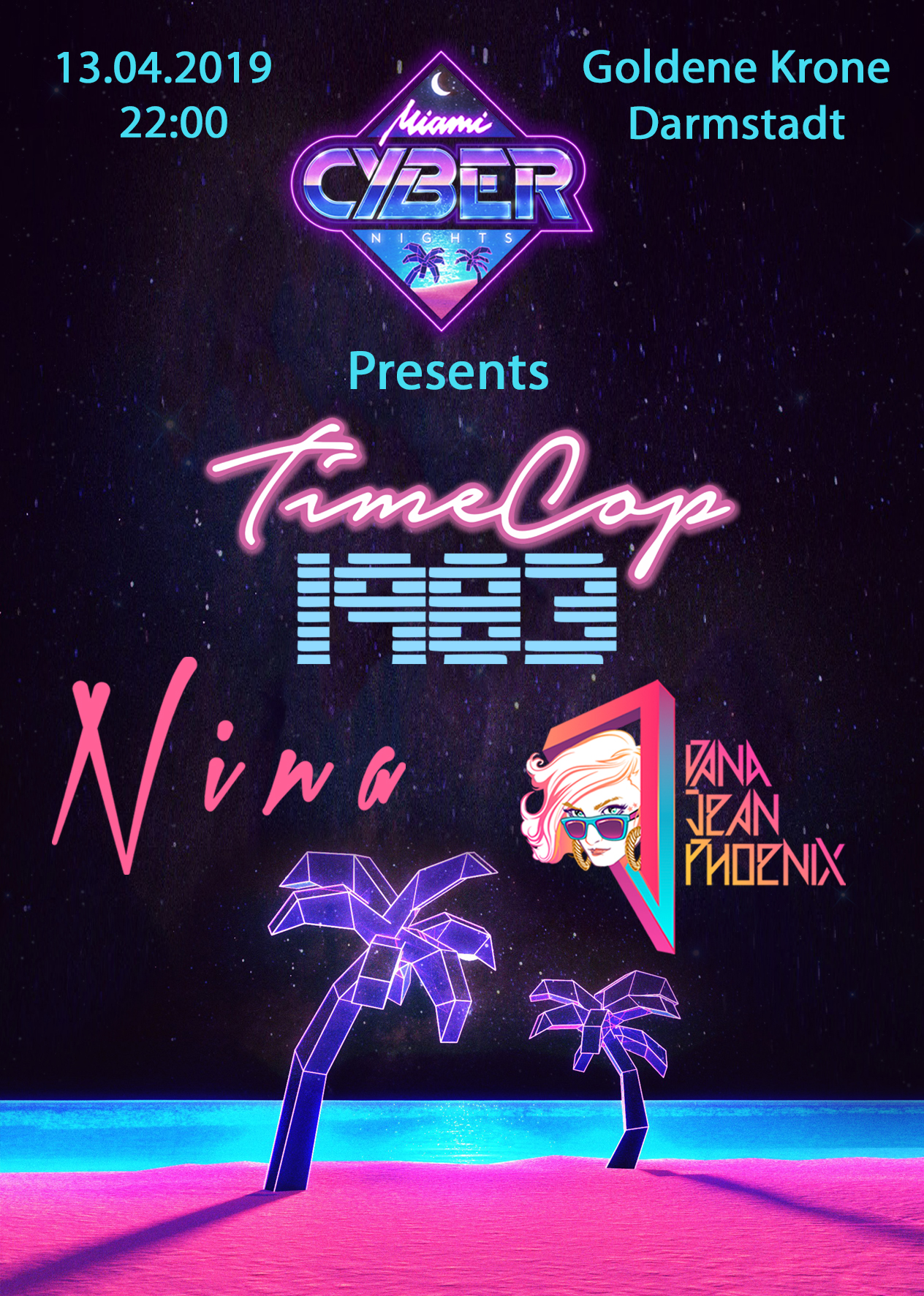 Miami Cyber Nights is back!
The next chapter of Synth/Retrowave Parties in Germany will begin in April.
And it will do so with a bang!

Timecop1983’s music is best described as romantic, cinematic and dreamy. There are many names for the genre but he always likes to label it as Synthwave or Dreamwave.

Amongst producers like “Carpenter Brut”, “Perturbator” and other more aggressive ’80s inspired musicians he stands out by creating mainly romantic music that takes you back to the time of Back to the Future, Power Rock Ballads and hanging out at the mall with your friends while looking at girls in hotpants and neon clothes.

He has been making music since he was 12 years old and started making music with Scream Tracker in MS DOS on a 386 computer without any musical background. After a long time of learning how to make music by himself he could finally come up with his own songs and he started making all kinds of music, ranging from hardrock to classical music.

After years of exploring his taste Timecop1983 decided to fully focus on 80’s inspired music. Especially the kind that creates a nostalgic/romantic feeling. His style is dreamy and emotional with modern/ambient/soundtrack influences and he is often praised for his uniqueness within the, still growing, “New Retro Wave” culture.

Since the release of his debut album “Childhood Memories” in February 2014 he has been anything but unproductive with 4 albums and 6 EP’s to his name.

His music has been featured in various (short) films (including Netflix productions Coin Heist and You Get Me), he is part of the soundtrack for the videogame “Crossing Souls” by Fourattic (published by Devolver Digital (Hotline Miami)), he has done soundtracking for various other films and he started a side-project called Division.

In 2016 he started doing live shows and he has done many (international) performances since. In his live performances he likes to combine his more upbeat/danceable tracks with his dreamy works.

Nina is a Synthpop / Synthwave singer-songwriter based in London, UK. Born and raised in Berlin, she began singing at the age of six and moved on to classical training during her teens. She cites Depeche Mode as one of her early musical influences and currently counts Kavinsky as one of her fans

Dana Jean Phoenix is a Canadian Synthwave artist who has gained a following in the international synthwave scene, collaborating with production heavyweights: Gost, Perturbator, Nightcrawler, Highway Superstar and Sunglasses Kid. Her original music has been featured on The Voice (US) and her collaboration with Dutch dreamwave artist Timecop1983 ‘Dreams (Feat. Dana Jean Phoenix)’, was featured in the Netflix original films ‘You Get Me’ and ‘Coin Heist’ and the PS4/PC game ‘Crossing Souls’.